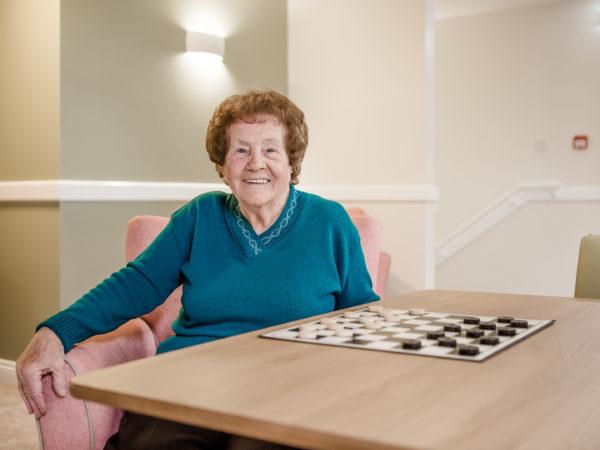 Nell Bower moved into Broadway Manor whilst her flat was being renovated – but 24 years later she still lives there because she loved it so much she didn’t want to leave.

The 90-year-old grandmother was amongst the first residents to move in when it was brand new in 1995 and is now the longest-serving resident.

Nell lives in one of 36 apartments and on the same floor there’s a hairdressers, which she books herself into every Friday morning and a large open communal area which looks out onto the grounds.

Also residents enjoy activities such as socials, crafts, bingo and keep fit sessions.Nell says the best part about living in one of our Retirement Living Plus schemes is the safety it gives her because it has a secure controlled door entry system, with a Scheme Manager on duty during the day.

She said: “The best thing about living here is feeling totally safe. I feel safe and my family know I am safe, which is really important to me.“You come and go as you like as you would in a normal house, it’s just brilliant.“You’ve got all the communal spaces and then you shut your front door and you have your own space.

The people here are smashing too.”

Nell, says the location of Broadway Manor is perfect for her and she enjoys walks to Morrisons to do her shopping and also plays Bingo on Holderness Road.

She also takes part in days out with the other residents which are organised by PFH.

Nell’s son and daughter were so impressed with PFH they too moved into some of our nearby properties.