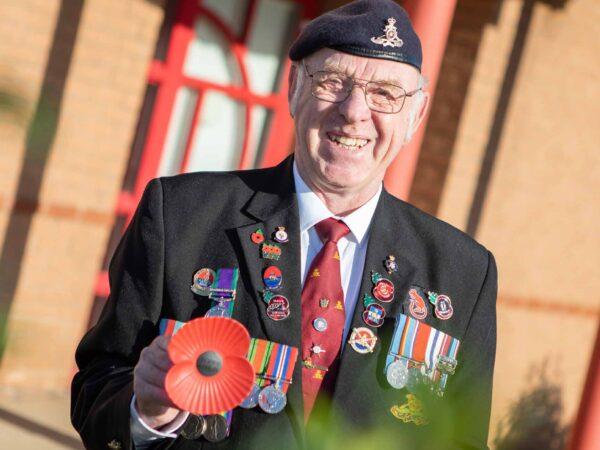 Proud veteran Vic Clubley raised almost £10,000 for The Royal British Legion towards the end of 2020.

The Ada Holmes Circle resident has been selling poppies outside Tesco, in Hall Road, north Hull, for the past seven years.

Mr Clubley served in the Royal Artillery, with most of his time served in Germany. He wears his and his family’s medals, dating back to World War I, with pride when he collects on behalf of the charity.

“The Royal British Legion helps veterans and their families, including those who have had a bereavement,” explained Mr Clubley, who raised £9,207 in just 12 days in November.

“During the 75th anniversary year, I raised £11,444 which was my highest ever total. I took over the patch from a friend of mine, she was in her 80s and was ready to stand down.

“It’s very hard for veterans because they have lived a way of life that suddenly stops and they lose their ‘forces family’ which can be very difficult.

“It’s a shock to the system for people who have been told what to do all of their lives – sadly 22 veterans take their own lives every day, many of them feel they have nowhere to go and many turn to drugs. It’s not the case for everyone, but for those who need the support the charity is there for them.

“The money raised helps veterans to establish themselves again, they might have a house to move into but no furniture for example. The work we do is very worthwhile.”

Mr Clubley also works with Hull Veterans Support Centre, although Covid restrictions mean his work has had to be put on hold.

“I’m out collecting for various military charities at least once a fortnight, but I’ve been known to do collections three weekends in a row. I have never been one for being inside, so lockdown does get to me occasionally but I am finding other ways to keep myself busy. I enjoy singing, I love country music and I can’t wait to be able to do karaoke with some of the other residents when we can all get together again.”