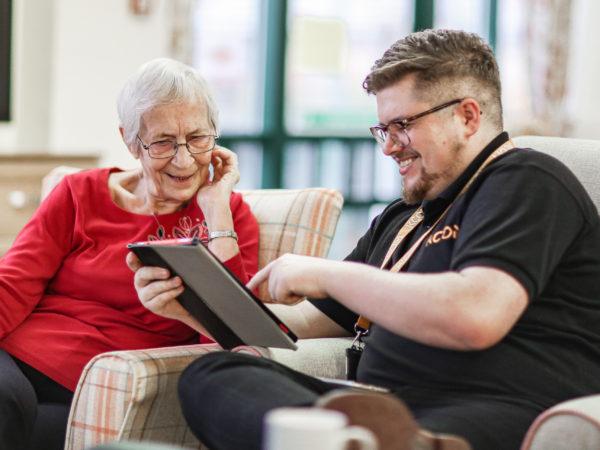 Just the thought of switching on a computer can be a daunting prospect for some PFH residents, but for others technology is helping them to listen to music, stay in touch with family and even order prescriptions.

In the last edition of People First, we revealed a pilot initiative for residents willing to try using a Tablet and Internet-enabled speaker – more commonly known as “Alexa” – in their home.

Several months in, ten residents have signed up to the scheme and are already reaping the benefits.

Many of these have also been improving their skills through our IT and Biscuits workshops, organised in partnership with KCOM. These sessions have taken place in Westgarth, Broadway Manor, Hebrides, Christopher Pickering Lodge and Broadway Pavilion with over 50 people benefiting.

Among those is Tracey Newbegin, who says her youngest of three sons wanted to bring her more into the 21st Century. “My youngest son is an IT engineer and he got me an Android phone which went to the wall about 10 times before I got used to it,” she said.

“Now I can video call the kids and grandkids. I’m also using my tablet and Alexa, which is brilliant. I have a Kindle on my tablet and I’ve been downloading books to read. It’s better for me than a book in my hand as I’ve got arthritis and cannot always hold a book. With a Kindle I can just flick the screen to change the page. I’m also using my tablet to order things off Amazon and asking Alexa what the weather is like, as well as asking her to call people for me.”

The initiative was made possible after PFH successfully secured National Lottery funding, through the Awards for All grant. We’re continuing to engage with interested residents with this exciting digital inclusion project, which is aimed at tackling loneliness and isolation by helping residents stay better connected with their families.

Tracey admits that when she got her first computer she didn’t dare do anything as she was frightened she would break it, but all that has changed now.

“I do banking on the computer and order prescriptions, I also have a few games on there – I like hidden object games and jigsaw puzzles. It helps to keep my brain active.”

Anyone who already has a WiFi connection in their home can register for the initial three-month pilot project. Don’t worry if you don’t understand how to use a tablet or how something like the Alexa technology works, as we are running workshops and support with KCOM to teach residents how to get the most from their new IT.

“As for the IT and Biscuits, that has been brilliant too. It’s company. It could be a full week before I see anyone so it is nice to meet up with people and if I have any problems I’m learning not just from the KCOM staff, but also learning from other people.

The only cost involved with taking part in the trial is if residents choose to keep the equipment after the trial has been completed, in which case they would need to cover the cost of the items provided to them. Residents can can pay for the package all in one go or over five months.