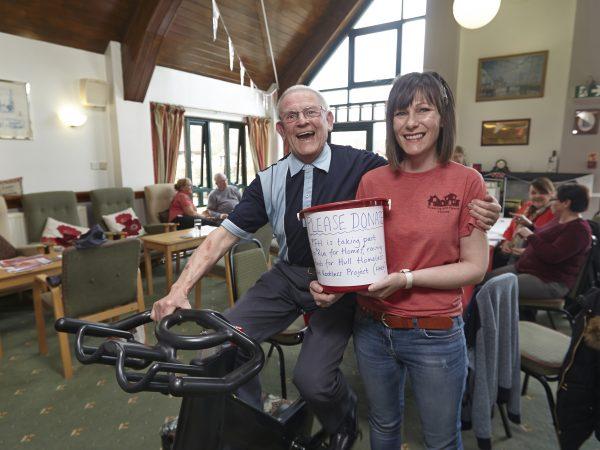 Residents of a thriving local housing association, which specialises in independent living for later life, haven’t let anything stand in their way of supporting a national housing sector campaign whilst raising vital funds to help end homelessness.

Run for Homes, pioneered by the National Housing Federation, is the latest initiative being backed by Pickering and Ferens Homes’ residents and staff, who have pledged to cycle the distance it would take to travel to each of its five sheltered housing schemes across the region.

The static cycle challenge launched on Wednesday, April 13, at Broadway Manor, in east Hull, where residents and staff took to the saddle racking up an impressive 50 miles in just three hours and raising enough money to fund Hull Harp’s breakfast club for a week, which has been providing support to Hull’s homeless for more than 30 years.

The bike, which has been donated by Nuffeild Gym, will make its way around the sheltered properties and end its journey at Pickering and Ferens Homes’ offices, at Silvester House, in Hull city centre, where the staff team will take it in turns to rack up as many miles as possible to get the team over the fundraising finishing line.

Claire Warren, chief executive of Pickering and Ferens Homes, said: “Housing associations are fundamental to the communities they serve, providing homes and support for millions of people. The sector-wide Run for Homes is just the latest example of how we are committed to going the extra mile to show our support for those local communities, as well as reinforcing how much we back the National Housing Federation’s efforts to end the UK-wide housing crisis within a generation.

“We are always overwhelmed by the commitment and support demonstrated by both the team and our residents at Pickering and Ferens Homes, who regularly come together to fundraise and take on remarkable challenges such as this one.”

Run for Homes is an opportunity for housing associations to raise awareness of what they do for the people and neighbourhoods in their area, and why they do it.

It comes one year after housing professionals from all over the country, including Pickering and Ferens Homes, took part in the giant ‘Homes for Britain’ relay to Westminster to get politicians to commit to ending the housing crisis within a generation.

Claire added: “Pickering and Ferens Homes continues to attempt to play our part in addressing the housing shortage in the region, as well as being dedicated to providing high quality homes for people as their needs change in later life.

“It was extremely inspiring to see so many of our residents get behind the national rally last year, which is why we felt it so necessary to do our bit again and hold an event of our own to support Run for Homes.”

This year’s campaign has seen professionals from the sector, together with staff from the National Housing Federation, journalists and commentators get teams together to run anything from 5k all the way up to full marathons to raise much needed money for housing and homelessness charities in their local communities.

Tina Walker, finance and admin manager at Hull Harp, said: “We were delighted to learn that Pickering and Ferens Homes had chosen to support Hull Harp through their Run for Homes fundraising efforts.

“With the money raised, we will be able to run the breakfast club for at least a week if not two. It’s absolutely fantastic that one of the residents managed half an hour on the bike and we can’t thank everyone enough who took part.”