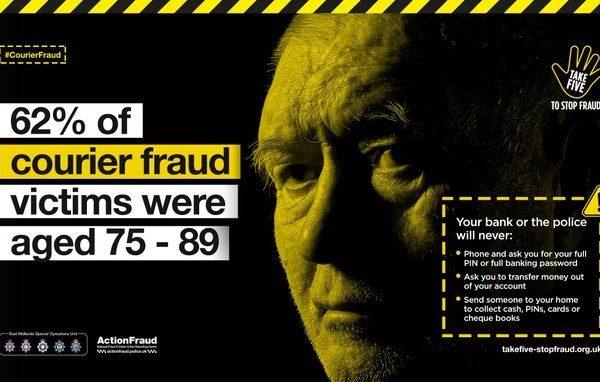 Speak to your loved ones about courier fraud

We’re asking residents across the East Riding and Northern Lincolnshire to start a conversation with vulnerable loved ones about courier fraud.

This week a national campaign, coordinated by the City of London Police, is focusing on educating potential victims on the different ways criminals con vulnerable and elderly people out of their money.

According to Action Fraud, victims of courier fraud lost more than £10m between August 2017 and July 2019.

Courier fraud begins with a phone call from the fraudster, pretending to be a bank official or a police officer. The caller may be asked to confirm some personal details that would be fairly easy to find out, such as their name and address.

Once the fraudster has gained the trust of the victim they will suggest a plausible scenario, such as some money has been removed from a victim’s bank account and staff at their local bank branch are responsible. Suspects have already been arrested but the “police” need money for evidence. Or the victims account has been compromised and the bank advise that all money is withdrawn and handed to a specialist fraud team for safe keeping.

When the money is handed over, the victim is promised that they’ll get all their money back. However, the fraudster then disappears, and the victim never receives anything.

Detective Sergeant Ben Robinson said “We’re encouraging everyone to start talking about courier fraud to family members, friends or neighbours who may be vulnerable.”

“Fraudsters prey on people’s vulnerabilities, loneliness and good nature for their own financial gain. These crimes are callous acts of criminality carried out by people deprived of any moral compass”.

“Thankfully we don’t see many of these types of scam in our area, however knowledge and awareness are often the best ways to prevent yourself or a loved one becoming a victim”.

“We would encourage anyone who has received a suspicious telephone call purporting to be from their bank to contact their card provider using the only the telephone number on the back of their debit or credit card and contact Action Fraud”.

We have the following advice to protect yourself from courier fraud.

Your bank or the police will never:

• Phone and ask you for your PIN or full banking password.

• Ask you to withdraw money to hand over to them for safe-keeping,

• Send someone to your home to collect cash, PIN, cards or cheque books if you’re a victim of fraud.

For more information and help or to report this and many other types of fraud, go to Action Fraud the UK’s national fraud and cybercrime reporting centre or call 0300 123 2040.