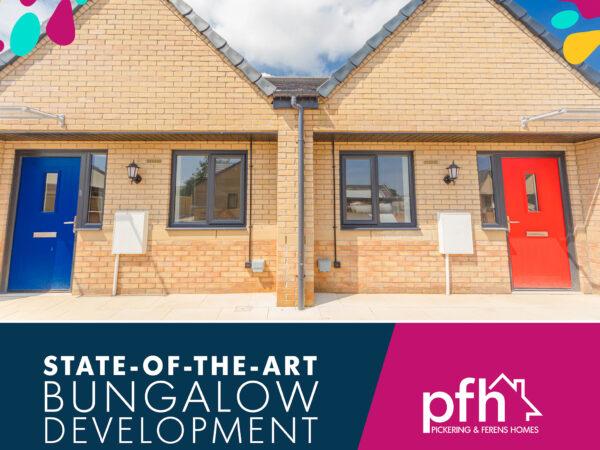 Work on a development of new bungalows on the former Eleanor Scott site is now complete. The development work, in Southcoates Lane, east Hull, saw the former almshouse cottages – which were built in the early 1900s, no longer fit-for-purpose and beyond economical repair – demolished to make way for new two bedroomed PFH bungalows.

Martin Sherman, Property Services Director, says the end result is a development of well designed and high-spec bungalows which are suitable for modern day living. “We are committed to upholding PFH’s high standards with every new development we undertake,” he said. “These bungalows are really impressive and meet the Design Space Standard, because we have allowed more space than the average property. We continue to place emphasis on creating communities and developing unique properties – we have certainly achieved both on this development and I’m sure the future residents of these properties will not be disappointed.”

Four of the former cottages were built in 1907 and formed part of a legacy of another charity created
some two hundred years earlier by Eleanor Scott who, in her will, left a property and 37 acres of farm land in the old parish of Southcoates to be leased for a reduced rent under what was then known as “poor relief”. Her will also established a charity school in the area in 1865 and a fund for the sick and poor. Long established Hull-based contractor Hobson and Porter has developed the new-builds for PFH. Wayne Cropp, Contracts Manager, said: “It has been a privilege to work on this development in partnership with PFH. The properties are highly specified and feature a modern design style. All of the properties are located in a culde-sac design and internally benefit from features such as fitted wardrobes. We wish the future residents who are allocated these properties every happiness in their
new homes.”