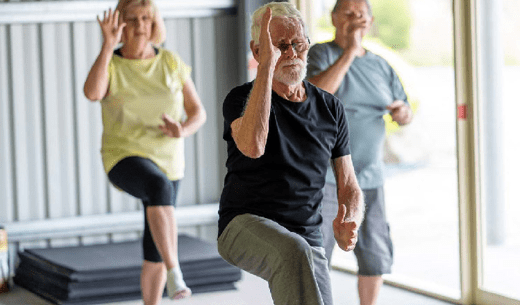 Medical research has shown that Tai Chi is effective for
preventing falls in older people.

PFH is therefore looking to run a series of taster sessions
for residents to try out the ancient martial art, which
combines breathing techniques with graceful movements.
The preventive effects are thought to increase with
exercise frequency and the research found that Yang style
Tai Chi seems to be more effective than Sun style Tai Chi.

Dr Anna Folwell, one of PFH’s Trustees, who is a
Consultant Community Geriatrician working at the Jean
Bishop Integrated Care Centre, recommended PFH
pilots the activity with residents after noticing one of the
impacts of the pandemic has been reduced physical
activity for some and an increase in falls.

Looking for research into how best to address this, Anna read a
British Medical Journal (BMJ) paper demonstrating the
Tai Chi can reduce falls by around 20%.
An extract from the BMJ report reads along the
following lines (some terminology has been simplified):

“Falls are common among older adults and are one
of the major threats to their health. The incidence of
falls varies with living status and increases with age; in
general population, 30 to 40% of people over 65 years
fall every year worldwide, increasing to 50% among
people aged 80 years and older. Falls in older people
are associated with considerable subsequent decline
in functional status and increase in nursing home
admissions and medical resources consumptions.

“A number of interventions, including adaptation and
modification of home environment, exercise, medication
modification and vitamin D supplementation, have been
applied for preventing falls. Tai Chi is a traditional systematic
strength training exercise widely practiced in China.

Tai Chi has been shown to be effective in improving balance, sense
of self movement, muscle strength and endurance, therefore
it may be beneficial for preventing falls among the elderly.”